The garage is finally done! The construction did not go as smoothly as we had hoped. Here’s what happened:

Site Prep for the Pole Barn/Garage

A load of stone was delivered and spread over the site and the materials arrived earlier than expected. I arrived on site at 7am but they were already there.

There was one hiccup with the inspection of the foundation holes. The crew handled it right away and added the extra wood to the bottom of the posts.

The rest of the structure went up quickly. 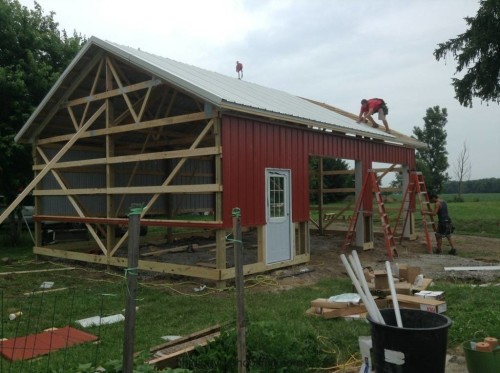 Next, the siding and roofing was attached. 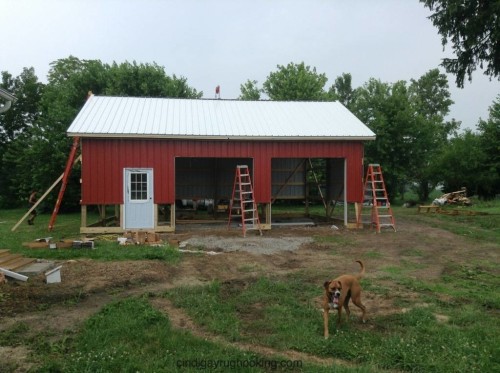 We added a wainscoting in the same color. We did not want to break up the walls with another color but we wanted the benefits. The lower part of the wall is more vulnerable to damage. It is much easier and cheaper to make repairs to a small panel rather than a full length panel. This feature added about $300 to the project. 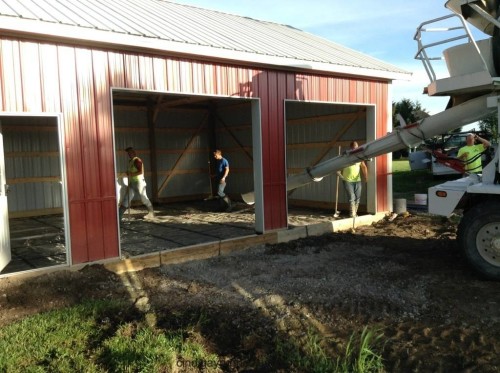 Next came concrete. Here is where our problems began. No forms were installed before the concrete was installed. One of the subcontractor workers arrived when we were not on site and used dirt that I had reserved for another project to create a dam for the concrete. It was sloppily dumped on the side of the building covering the siding in some cases. This was not good dirt meant for finishing. It was dirt that I was going to use to fill in low spaces in other parts of the yard that would then be covered by a layer of good top soil. This dirt had grass clumps and rocks throughout. I expected more stone to arrive for the inside of the building, but it never did. 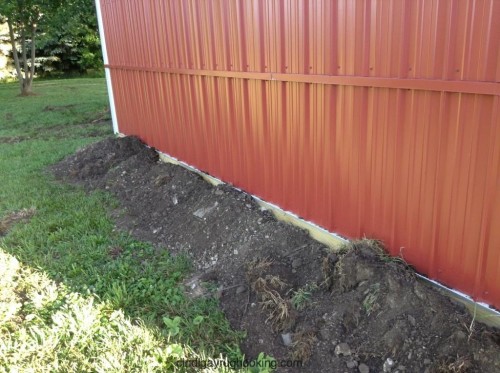 The concrete was laid on the initial thin layer of stone laid before construction began. After it cured and we could get inside, we realized that the level was almost 2″ too low. The photo below shows one of the beams. When the building was done and before the concrete was installed, I had asked a Cleary employee about the level of the concrete. He marked it on this post for me for reference. As you can see the concrete is much lower than it should have been. 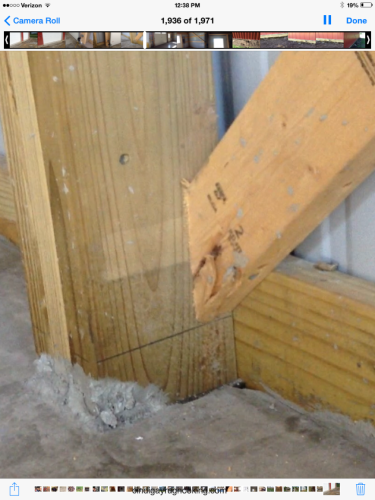 We are still worried about the effects of weather on this low concrete. The concrete oozed out from under the structural board. It was emphasized during the estimate phase that expansion pads were placed around the beams so that the concrete could float independently of the building. To me, the concrete running under the skirt board will put direct pressure on the building when it moves with the weather. Cleary assured us that this was not a problem and advised us to cover it with stone or mulch when I complained that it was unsightly. To my untrained eye it did not look like good workmanship. It was a mess. 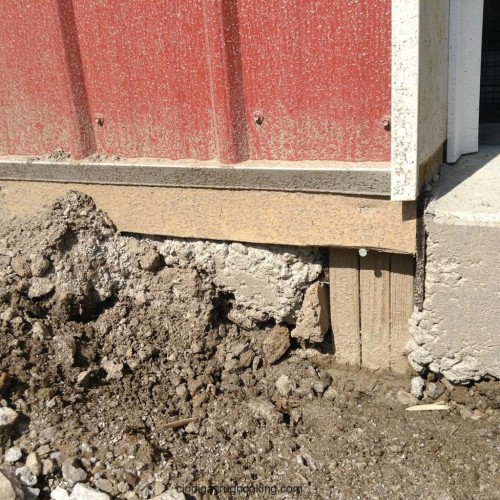 When you pull away the piled up dirt, you can see the excess concrete under the board where you should have seen only stone. I never got a good answer on why the extra stone was not delivered. We were charged extra above and beyond the initial estimate due to the distance of our home from the stone supplies, yet we only received one load at the very beginning of the project. We were initially going to contract for the concrete ourselves, but we decided to pay the higher fee and allow the “experts” to do it right — a decision I still regret.

The Cleary salesman spent several hours chipping away at the excess concrete and then smoothing the dirt to make it more presentable. It will be a planting area that I will probably struggle with for years. I was so disappointed I could not write this post for many months. It still makes me upset. It is such a pretty little building but the concrete is an eyesore. The estimate said that the concrete would be sealed. After talking to the subcontractor about the concrete problems he said that it is not a sealer but a curing agent. The blotchiness would go away. It has been almost 1/2 a year and the floor is still very blotchy.

We love the Cleary building but question their choice of concrete subcontractor. To assure us, we were told that Cleary has worked with Ogg Brothers in McCutchenville, OH for many years. Somehow that did not make me feel better.

The Lesson – You cannot trust contractors. I got comfortable with Cleary. The building went up beautifully. I trusted them to complete the job at the same level of workmanship. Even though the concrete guys were “not our crew”, I expected them to work at the same level. Our next building would have been put up by Cleary without us thinking twice. Now when we are ready, we will shop around again or at the very least, contract our own concrete work.