“I want to drive past a property first,” he says.  Here we go again.  We’ve been doing this on and off now for months.  We’ve never been able to find something within our budget, in a location that we liked, with extra space and that “just felt right.”  We’ve been doing a lot of driving around.

Most properties were too low and prone to flooding.  Some were too bare – no trees at all.  Others were too steep.  Needless to say, the hilly ones were not in NW Ohio which is generally flat as a pancake.  We were looking in Southern Ohio and North Carolina.  The location did not matter a whole lot, my main goal was to shovel the least amount of snow possible.  Since my husband’s heart attack in 2010, I’ve had to do all the snow shoveling.  I did not like winter before.  Now I like it even less. In a few years Dave would be retiring and I wanted to be settled by then.

We started looking closer to home when we realized a long term move might be the easiest way to make this work. The house we would buy would need work, the business needs to be in a stable environment. I don’t want to shut down business during construction. By doing the remodel in one house and keeping the business temporarily in the other, we can have the best of both worlds.

We arrived on the property and confirmed that it was empty and got permission to walk around.  The grounds were horribly overgrown but I could see that someone once loved this small piece of ground.  There were fruit trees, I wasn’t sure which kind.  I spotted berries, lilacs and some weed covered evergreens.  There was potential here. 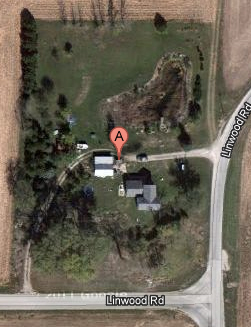 All weekend we talked about it, beginning to imagine ourselves there.  Suddenly we realized that we both liked the property and we’d better make an offer before it got sold.  On Monday we made an appointment with a realtor and wrote up an offer.  By Friday we had heard it was rejected.  We were leaving town on Sunday so we prepared another offer that would be submitted the next week.  Before that could happen we got a phone call on Monday that our offer was accepted.

Then panic and reality set in.