Now that we have most of the siding repairs done, the house looks much better from the street, but it is fifty shades of white. We used aluminum siding that was white, new but not weathered so it does not match perfectly. We used primer and any left over white house paint plus a few new gallons – all different shades of white. And the most creative – marine shrink wrap tape.

Dave started on the north side covering up the sliding glass door? opening.  This part of the house was fiberboard with aluminum siding over it.

We covered the seams with the marine tape. It was about $20 for a roll of 6″ wide tape. The tape is really sticky and only time will tell if this was a really good idea or if we just created a mess. Even if it does not work long term, it will help to keep the weather out for the time it stays on. Hopefully it will last until the we are ready for new siding. Dave used some spray paint to adjust the color a bit also. Before he started I scrubbed the wall with bleach water to remove the green growth. This is the north side of the house and it does not get much sunlight.

You can see the repairs on the west side also. There are new windows on this wall and we will not replace them right away. They are in the wrong spots and the wrong size but until we finalize the plan for this room, these windows will work just fine. We needed to do some work to keep the weather out. Below is the before photo of this side.

Here you can see the new/repaired eaves troughs. Dave also removed one window from the south side. This window would be in the basement stairwell once we build the wall on the inside of the house to box in the basement stairs. The window was in bad shape and it did not make sense to spend money on a new window in that location so we just removed it. Below is the before photo of that side.

Our four legged inspector is on the job. 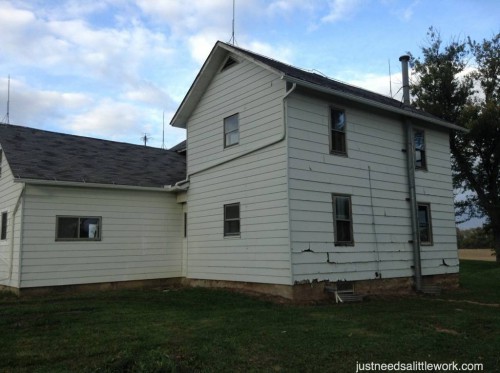 This south side had a lot of damage and most of the lower boards needed to be replaced.

A lot of the work in this area was just getting rid of unneeded stuff such as the prior owner’s satellite dish, the lightning rod cable and a black sump pump tube that was later buried when we did the basement waterproofing.

The front of the house had a black skid mark down the front from the lightning rod cable. The eaves trough installer cut all three of them for us so I was able to put some paint on to cover the marks.

There was one board just below the upper windows that needed replacing.

The dark grey blue was depressing and felt dirty. It probably was great when it was fresh, but now it just looked tired. A rich green door adds a bit of color.

A fresh coat of primer and then paint (that blue was hard to cover!), some new storm windows and the porch now looks much fresher. My favorite improvement was the ceiling. Now I need to find a light fixture that I like. Not many options in ceiling lights. Most exterior lights are wall mounted.

All that is left to do now is the front of the house and the area over the porch. With luck, the weather will hold out long enough for us to get this done.


On a personal note

I haven’t posted in a while because we have been so busy. I had time to write up this post because I spent the night in a hospital in North Carolina. I had chest pains and will need follow up when I get home but the likely cause was an esophageal spasm. In the meantime, I’m going to enjoy my remaining time here with my friend, Sue Ellen. Here is the view from the hospital window. I can’t wait to get back out there.

I tried my best to ignore the chair in the corner.